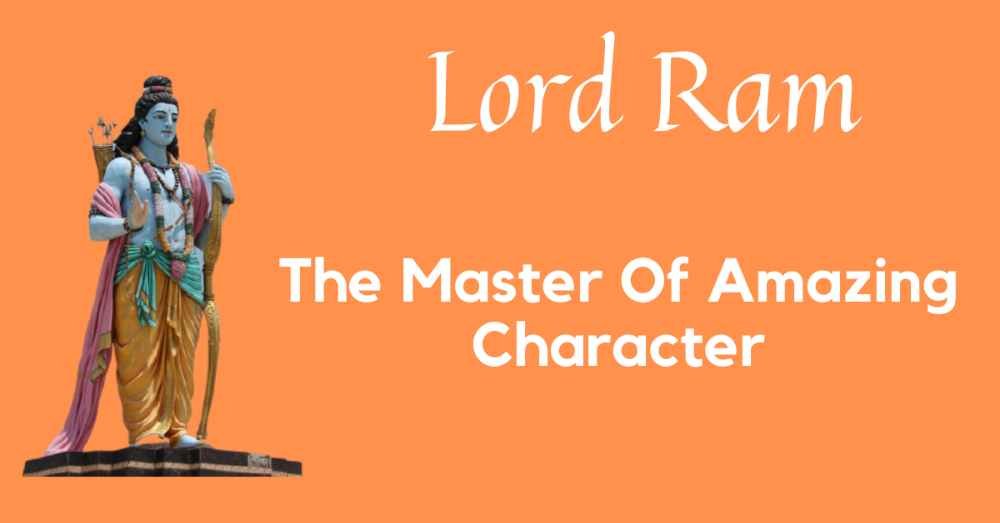 Writing and speaking anything about Lord Ram is like showing a lamp to the sun. An epic Ramcharitmanas has been written on his perfect character. The author of this epic is Tulsidas. Lord Ram is said to be the best avatar ever. Lord Ram was an incarnation of Lord Vishnu who incarnated in Tretayuga.

Lord Ram – A Symbol Of Perfect Character And Efforts

The whole world knows about Lord Rama that he is known as Maryada Purushottam (The Supreme Man). He set an unforgettable example for the world by his demeanor and behavior. His conduct and words are incomparable.

If we read about the life of Lord Rama, it is known that his life has been a struggle from the beginning. He never deviated from his conduct and duties even in the midst of those struggles and difficulties. He always cited the example of a perfect son, husband, brother, friend, and king.

Lord Ram never backed down from his efforts even under difficult circumstances. The mantra of his life was, “our efforts may fail, but we should never be failed to make our efforts”. Due to his excellent character and qualities, a great sinner like Ravana took the name of the Lord while dying.

Lord Ram is worshiped all over the world due to his excellent character. Everyone wants a son, husband, king, and friend like him. Whenever there are difficulties in life, the devotees of Ram face those difficulties by raising the slogan of Jai Shree Ram.

Even a whole life is not enough to write about one quality of Lord Rama. But in this short article, we will discuss the qualities of God, by adopting which we can spend our life with happiness and peace even in the midst of difficulties and struggles.

The Unmatchable Character Of Lord Ram

The whole world is crazy about Lord Rama’s character. He offered an example from his character that will be remembered for ages. He sent his younger brother Laxman to his greatest enemy, Ravana, to acquire Vedic knowledge. Till date, we do not get to see and hear such an example.

The whole world is aware of Ram’s qualities. But there are some qualities of Ram which are very rare. Let us discuss those rare qualities of Lord Rama’s character, which are rarely mentioned.

A skilled leader understands and appreciates the importance of even the smallest act. Ram is a good example of this.

When Ram’s monkey army was building a bridge over the sea to go to Lanka, a small squirrel was also cooperating in the construction of the bridge according to her ability. She too was putting all her strength and putting small stones in the sea.

The apes were carrying very large stones and compared to them, the squirrel was able to lift very small stones. Seeing the squirrel doing this, the apes made fun of her a lot. The apes picked up the squirrel and threw her and she fell at the feet of Lord Rama.

Ramchandra lovingly caressed her by raising her hands and praised her amazing work. He explained to his monkey army that one should appreciate the motive behind that work, not the result of the work. Ramachandra allowed the squirrel to work in the construction of the pool.

There is a description in the epics that the same small stones of the squirrels served as the foundation for the big stones and saved the bridge from breaking.

A good leader gets his followers to do double the work of their ability and also gives a reward for that work. This lesson can be easily understood from the character of Ramchandra.

Here inner management is meant by our own mind and nature. Ramchandra’s inner management was amazing. If even a part of his character comes into us, it is as if the purpose of our life is fulfilled.

If we look at the life of Lord Ramchandra, then it is known that difficulties and troubles never left him. Out of all the difficulties he faced in his life, if one of the difficulties came in our life, then our mental balance is bound to deteriorate.

Ramchandra kept all his emotions (anger, jealousy, greed, impatience, etc.) under his control. He did not let any situation (good or bad) dominate his feelings and became the inspiration of inner management for all of us.

Ramchandra is worshiped all over the world because he never allowed the circumstances to dominate his state of mind. He remained the same even when there is happiness, sorrow, victory, defeat, gain, and loss. Even the gods yearn to have a balanced mind like him.

This is one of the important qualities of Lord Ram that hardly anyone ever discusses. His whole life is inspiring despite being struggling. He never blamed the circumstances for the difficulties. Whatever was good or bad in his life, he accepted it.

Acceptance here does not mean that if anything happens to us, we should not take any action. Lord Ram never offered such an example. Whatever was good or bad with him, he planned ahead and implemented it, not trying to change it. Let us look at some examples of this matchless quality of him:

4. Identification Of Qualities Even In Demerits

Lord Ram is the best connoisseur. He is proficient in the art of finding one quality out of thousands of fortifications. Ravana, who was his biggest enemy and was full of fortifications, Ramachandra also found virtue in him.

When Hanuman came to Ramchandra with the information of Goddess Sita, after hearing the news of Sita, he embraced Hanuman. Showing gratitude to Hanuman, he described Hanuman as equivalent to his younger brother Bharat.

When Sugriv (The king of Kishkindha) assisted Lord Ram with his entire army of monkeys to fight with Ravana, Ramachandra thanked Sugriva with folded hands.

There are many such stories in Ramayana where Ramchandra never hesitated to express his gratitude. If this quality is in us, then all our deteriorated relationships will improve and the whole world will love us.

Everyone is the same for Lord Ram. Every human being is equal to him. He has nothing to do with caste and religion. Considering all beings equal is one of the main qualities of Ramachandra.

This quality of Ramchandra is depicted with great beauty from the story of Shabari in Ramayana.

Shabrai was a low caste old lady who lived in the forest. When she got the information about Lord Rama’s arrival, she broke a lot of berries to feed Ramachandra. To check whether the berry is sweet or not, she tasted all the berries a little bit.

Ramchandra gave the biggest example of equality with his army of monkeys. Ram was God himself. To help them, an army of all the gods would have arisen. But he accepted the invitation of his friend Sugriva and fought Ravana with his monkey army.

Lord Rama is worshiped as a symbol of patience. His life was full of unpleasant incidents. We have all read and heard about the events in his life.

The biggest feature of his character is that he did not lose his patience in any situation. He always kept his heart and mind under control.

When he needed a path from the sea to go to Lanka, he kept praying to the sea for 3 days. Eventually, the sea had to give way. We all know that the monkey army of Ramachandra built a bridge over the sea and reached Lanka.

This is one of the very rare qualities of the character of Lord Rama. Very few people know that after killing Ravana, he went to the Himalayas and did penance to repent of killing Ravana.

Ramchandra regretted that he had killed a scholar and a devotee of Lord Shiva. To repent, he went to the Himalayas and did penance.

This quality of Ramchandra has become extinct from this world. We have become so blind in our selfishness that we harm even good people for our benefit. In today’s time, there is no importance of relationships and friendship. All relationships depend only on benefits.

Nobody can match Ramchandra in terms of hospitality. Friend or foe, every creature that comes to his door goes back only after being satisfied. Lord Ram welcomes and greets everyone equally without any discrimination.

When Ramachandra came back to Ayodhya after 14 years of exile, he thought of thanking his friend Sugriva. Ramachandra invited Sugriva’s army of monkeys to come to his palace.

There is a description in the epics that Ramachandra welcomed Sugriva’s army of monkeys, which the gods were also surprised to see. He greeted each monkey like a king.

The words of any incarnation of God did not have as much impact on human civilization as that of Ramachandra. A person can achieve success in life by following Ramchandra’s character and his words. His precious words are as relevant today as they were 10000 years ago.

Lord Rama is worshiped everywhere. He presented an example of a perfect character in front of the world. Such a character has never been born and never will be. Due to his excellent character, he has been given the title of Maryada Purushottam (The Supreme Man).

His life was full of difficulties from the beginning. But he never shirked from his duty. He faced all the difficulties of life patiently.

We get to learn a lot from his character, like leadership, love, inner management, compassion, acceptance, gratitude, equality, patience, etc. If all these qualities come in us, then all the world will be in our footsteps.

The whole world is crazy about the words spoken by Lord Ram. There is a wealth of wisdom hidden in his every word. If we follow the words of Lord Rama, we will achieve success as well as fame.

If you also want to succeed in life and want to make yourself so that the problems of life do not spoil you, then you will have to adopt the qualities of Lord Ram. If their qualities come into you then you will become the lord of all the three worlds. So let’s say loudly “Jai Shree Ram” in praise of Ramachandra.