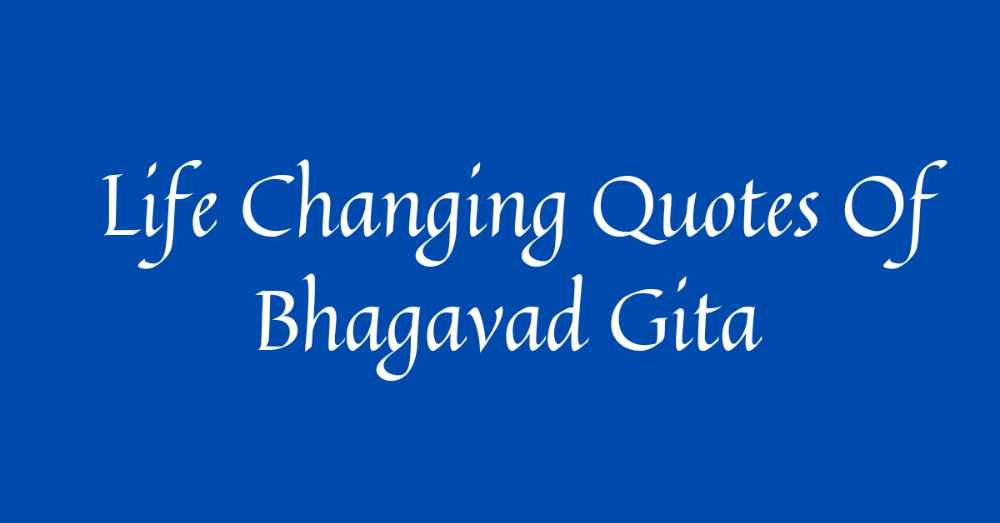 In this article, we will discuss those Bhagavad Gita quotes which are world-famous. We will try to understand the meaning of those quotes deeply.

Let us now read and understand those 15 Bhagavad Gita Quotes that bring positive changes in our lives.

“O Arjuna! Do not get this inferior impotence. It does not suit you. O oppressors of enemies! Stand up for war, abandoning the petty debility of the heart.”

Meaning: This quote is unique in itself. Bhagavad Gita Quotes are incomplete without this verse. In the first chapter, Arjun was telling the agony of his mind and Krishna was listening. Arjuna kept speaking and Krishna went listening. When Arjuna fully expressed the pain inside him and surrendered himself to Krishna, then these wonderful words came out of Krishna’s holy tongue.

Krishna says: Arjuna, what has happened to you? Why are you talking like a coward, despite being the best warrior of this world? Seeing your loved ones is causing pity in your mind. Your loved ones are standing in front of you to fight. Why are you showing compassion for such evil people?

Meaning: It is one of the most prominent quotes of the Bhagavad Gita. Krishna is here advising Arjuna to carry out his duties irrespective of the outcome.

Some foolish people do not understand this Bhagavad Gita quote and have made it controversial. Those foolish people say that if you want to do anything without worrying about the results, do anything. Do not care about right and wrong.

Whereas Krishna wants to say through this verse that if you work with the result in mind, then your focus will be on the result only. You just focus on your work. Increase the quality of work. The results will be good on their own.

“For the protection of the good, for the destruction of the wicked, and for the establishment of righteousness, I am born in every age.“

Meaning: When the primacy of iniquity and religion starts disappearing, then Krishna voluntarily appears. The rules of religion are given in the Vedas and if there is any error in following these rules, then man becomes irreligious.

Both of these are important verses of Bhagavad Gita Quotes.

Here religion does not mean any particular community or caste. Religion means “rules”. For the welfare of this society and the world, there are some rules in the Vedas that have nothing to do with any religion.

When there is an increase in the number of people in the world who do not follow their duty and obstruct others to follow their duty, Krishna has to come in some Avataar to establish balance in the society.

With an Avatar, Krishna protects good people and destroys bad ones.

“The man who thinks about the objects gets attached to those objects, the desire of those objects arises from attachment and anger arises due to the failure in the desire.”

Meaning: It is one of the most special quotes of the Bhagavad Gita quotes. This is very practical and it happens to all of us. But Krishna had told this problem 5000 years ago, one of the biggest problems of human beings.

It is very easy to understand. Krishna is explaining to Arjuna here that thinking more about the subjects creates an attachment for that thing and we go crazy to get it. Even after efforts, if we are not able to achieve that thing then anger arises in us.

“Whatever the superior man conducts, other men also behave in the same manner. Whatever he proves, the whole human community starts to behave accordingly.”

Whether it is a king or an administrative officer of a state, whether a father or a teacher, all these are considered to be the natural leaders of the ignorant masses. They all have a great responsibility towards their dependents, so they should be familiar with the ideal texts related to moral and spiritual codes.

“A devotee who is devoted to divine knowledge and who has subdued the senses is entitled to receive this knowledge and upon attaining it, he instantly attains spiritual peace.”

Meaning: Krishna tells Arjuna that only after running behind the senses of a person, a person is unhappy. When one subject is attained, the mind automatically starts following other subjects. This sequence goes on throughout life.

On the contrary, the person who has understood the truth that there is no benefit of running after the subjects of the senses and has overcome his senses is supremely happy.

“Since the mind is fickle (volatile), disorderly, obstinate, and extremely strong, I find it more difficult to tame it than to tame the air.”

Meaning: It is also one of the important quotes of Bhagavad Gita. This verse has been spoken by Arjun. By reading this, it is easy to understand that Bhagavad Gita Quotes are relevant for all ages.

From Arjun’s words, we understand that the problems of the mind that we are going through today, even 5000 years ago, had the same human problems.

Krishna has done a post-mortem of the human mind in the form of Bhagavad Gita Quotes.

“O Arjun! You should always think of me and also fulfill the duty of fighting. By dedicating your deeds to me and fixing your mind and intellect in me, you will definitely be able to achieve me.”

Meaning: This sermon given to Arjuna is very important for all the people who are busy with material works. Krishna does not say that one should abdicate his duties.

A person can contemplate Krishna by chanting Hare Krishna while simultaneously doing his/her works. With this, a person will be freed from the material world and will put his mind and intellect in Krishna.

“O Arjun! Of course, it is very difficult to subdue the fickle mind, but it is possible through proper practice and by abstinence.”

Meaning: Krishna has accepted the universal problem of the mind and has also given solutions for its solution.

Krishna agrees that it is not easy to control the fickle mind. The mind is the root of our problems. If we have control over our mind, then all our problems will automatically go away.

He has pointed to Yoga and Meditation as a practice. He has suggested the path of Devotion in the form of detachment.

“The soul can neither be fragmented by any weapon, nor can be burnt by fire, nor soaked by water or dried by air.”

This source of the universe is never born and never dies. Even before the creation of this universe, Consciousness was, is, and will be. The Consciousness cannot be cut, nor burnt, nor strangled, and neither can it be dried.

“If you are killed in battle, you will get heaven or if you win you will enjoy the kingdom of earth. So stand up and fight with determination.”

Meaning: Krishna is counting the benefits of Arjun for performing his duty. He is explaining to Arjun, scared of war, that it is your duty to fight. Be prepared for war regardless of victory and defeat.

If you win, you will become the king of the earth and if killed, you will enjoy the happiness of heaven. It is also written in the scriptures that those who perform their ultimate duties get a place in heaven.

“You fight without thinking of happiness or sorrow, loss or gain, victory or defeat. You will not incur any sin by doing so.”

Meaning: It is the specialty of Bhagavad Gita that its verses repeatedly inspire us to fulfill our duties. Krishna is repeatedly and differently speaking to Arjun to fulfill his duties.

Krishna is explaining to us that while walking on duty, one should not worry about profit, loss, victory, defeat, happiness, and sorrow. It should be our ultimate duty to carry out our duties.

“Of course, it is impossible for anybody to abandon all deeds. But those who renounce the results is renunciation.”

Meaning: This is an important verse of the Bhagavad Gita Quotes. Krishna is explaining that it is impossible for any creature to renounce deeds. As long as there is life, the creature remains trapped in deeds. Where there will be deeds, there will also be results of deeds.

“A man who does not get distracted by happiness and misery and has similar feelings in both of them, he is worthy of liberation.”

Some Other Important Bhagavad Gita Quotes

“One who controls the senses, but his mind keeps thinking of the subject of senses, he deceives himself and is called a liar.”

“Do your assigned work, because it is better to do karma (Deed) than not to do karma. Without karma, there cannot be sustenance.”

“Just as ignorant people work with the attachment of results, similarly scholarly people should work in a non-attached way to lead people on the right path.”

“Dedicate all your work to me and fight with full knowledge, devoid of any desire for profit, without any claim of ownership and laziness.”

“Many people have been sanctified by my knowledge in the past, free from attachment, fear, and anger, and fully in me and coming to my shelter. In this way, all of them have attained my divine love.”

“No karma (Deed) can affect me, nor do I wish for a result. Who knows this truth in my relationship, he never binds in the loop of deeds.”

“When one is enlightened by that knowledge, which leads to the destruction of ignorance, then everything becomes manifest through his knowledge, as in the day all things are illuminated by the sun.”

“Man should save himself with the help of his mind and do not let himself fall. This mind is a friend of men and also an enemy.”

“There is no truth better than me. Just as pearls are intertwined in the thread, similarly everything depends on me.”

Thanks for reading our small article on Bhagavad Gita Quotes.

Get The Mindful Meditation Course By Clicking The Book Image